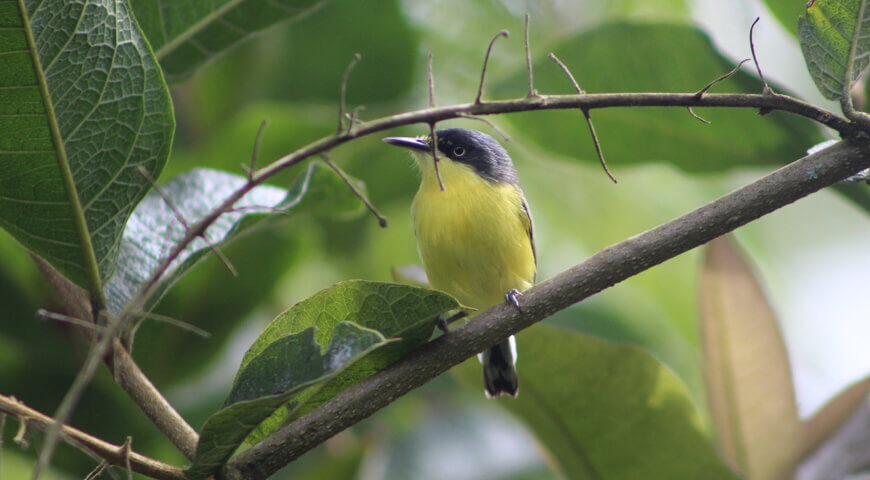 The tyrant flycatchers (Tyrannidae) are a family of passerine birds which occur throughout North and South America. They are considered the largest family of birds, with more than 400 species. They are the most diverse avian family in every country in the Americas, except for the United States and Canada. As could be expected from a family this large, the members vary greatly in shape, patterns, size and colors.

Some tyrant flycatchers superficially resemble the Old World flycatchers, which they are named after but are not closely related to. They are members of suborder Tyranni (suboscines), which do not have the sophisticated vocal capabilities of most other songbirds.

Most, but not all, species are rather plain, with various hues of brown, gray and white commonplace. Obvious exceptions include the bright red vermilion flycatcher, blue, black, white and yellow many-colored rush-tyrant and some species of tody-flycatchers or tyrants, which are often yellow, black, white and/or rufous. Several species have bright yellow underparts, from the ornate flycatcher to the great kiskadee. Some species have erectile crests. Several of the large genera are quite difficult to tell apart in the field due to similar plumage and some are best distinguished by their voices.

Behaviorally they can vary from species such as spadebills which are tiny, shy and live in dense forest interiors to kingbirds, which are relatively large, bold, inquisitive and often inhabit open areas near human habitations. As the name implies, a great majority of tyrant flycatchers are entirely insectivorous. Tyrant flycatchers are largely opportunistic feeders and often catch any flying or arboreal insect they encounter. However, food can vary greatly and some (like the large great kiskadee) will eat fruit or small vertebrates. In North America, most species are associated with a “sallying” feeding style, where they fly up to catch an insect directly from their perch and then immediately return to the same perch. Most tropical species however do not feed in this fashion and several types prefer to glean insects from leaves and bark. Tropical species are sometimes found in mixed-species foraging flocks, where various types of passerines and other smallish birds are found feeding in proximity.

The smallest family members are the closely related short-tailed pygmy tyrant and black-capped pygmy tyrant from the genus Myiornis. These species reach a total length of 6.5–7 cm (2.6–2.8 in) and a weight of 4–5 grams. By length, they are the smallest passerines on earth, although some species of Old World warblers apparently rival them in their minuscule mean body masses if not in total length. Of the 400 species in the world Costa Rica has 77 of them.