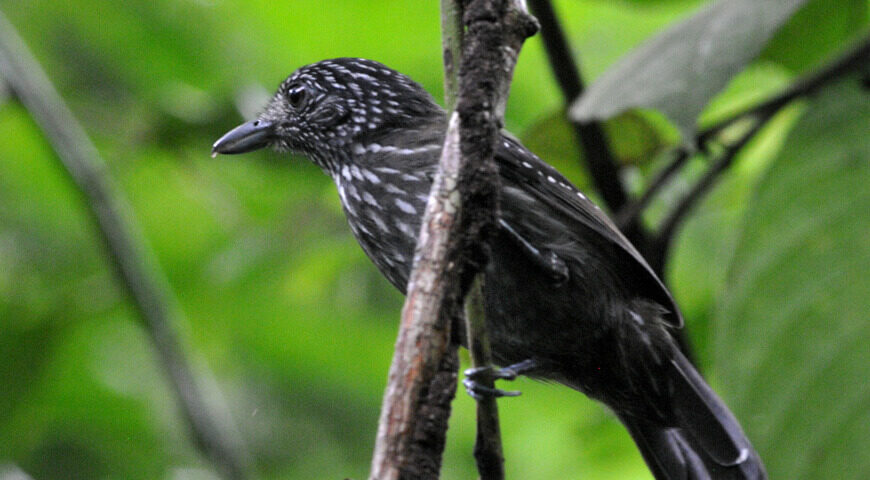 The antbirds are a large passerine bird family, found across subtropical and tropical Central and South America, from Mexico to Argentina. There are more than 230 species, known variously as antshrikes, antwrens, antvireos, fire-eyes, bare-eyes and bushbirds.

They are related to the antthrushes and antpittas (family Formicariidae), the tapaculos, the gnateaters and the ovenbirds. Despite some species’ common names, this family is not closely related to the wrens, vireos or shrikes.

Most species live in forests, although a few are found in other habitats. Insects and other arthropods form the most important part of their diet, although small vertebrates are occasionally taken. Most species feed in the understory and midstory of the forest, although a few feed in the canopy and a few on the ground. Many join mixed-species eeding flocks, and a few species are core members. To various degrees, around eighteen species specialise in following swarms of army ants to eat the small invertebrates flushed by the ants, and many others may feed in this way opportunistically.

Antbirds are monogamous, mate for life, and defend territories. They usually lay two eggs in a nest that is either suspended from branches or supported on a branch, stump, or mound on the ground. Both parents share the tasks of incubation and of brooding and feeding the nestlings. After fledging, each parent cares exclusively for one chick.

Thirty-eight species are threatened with extinction as a result of human activities. Antbirds are not targeted by either hunters or the pet trade. The principal threat is habitat loss, which causes habitat fragmentation and increased nest predation in habitat fragments.

Many species participate in mixed-species feeding flocks,forming a large percentage of the participating species within their range. Some of these are core or “nuclear species”. These nuclear species share territories with other nuclear species but exclude conspecifics (members of the same species) and are found in almost all flocks; Other species of antwren and antbird join them along with woodcreepers, ant-tanagers, foliage-gleaners and greenlets. The benefits of the mixed flock are thought to be related to predation, since many eyes are better for spotting predatory hawks and falcons.

Comparisons between multi-species feeding flocks in different parts of the world found that instances of flocking were positively correlated with predation risk by raptors.For example, where Thamnomanes antshrikes lead the group they give loud warning calls in the presence of predators. Swarms of army ants are an important resource used by some species of antbird, and the one from which the family’s common name is derived.

Many species of tropical ant form large raiding swarms, but the swarms are often nocturnal or raid underground. While birds visit these swarms when they occur, the species most commonly attended by birds is the Neotropical species Eciton burchellii, which is both diurnal and surface-raiding. It was once thought that attending birds were actually eating the ants, but numerous studies in various parts of Eciton burchellii’s range has shown that the ants act as beaters, flushing insects, other arthropods and small vertebrates into the waiting flocks of “ant followers”. The improvement in foraging efficiency can be dramatic; a study of spotted antbirds found that they made attempts at prey every seconds away from ants, but at swarms they made attempts every seconds. While many species of antbirds (and other families) may opportunistically feed at army ant swarms, 18 species of antbird are obligate ant-followers, obtaining most of their diet from swarms. With only three exceptions, these species never regularly forage away from ant swarms. A further four species regularly attend swarms but are as often seen away from them.

Obligate ant-followers visit the nesting bivouacs of army ants in the morning to check for raiding activities; other species do not.These species tend to arrive at swarms first, and their calls are used by other species to locate swarming ants. Of the 230 species Costa Rica has 22 of them.